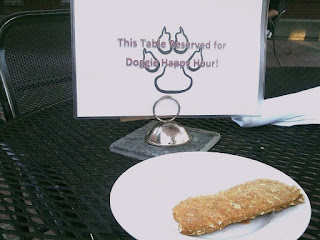 Chou Chou and I have been going to "doggie happy hour" -- Canines In The Courtyard, as the event is advertised in the newspaper.


It is held every Thursday evening at a lovely restaurant, sponsored by the ASPCA. We eat on the patio and meet new people, as our dogs mingle on leash and get the royal treatment that you would expect (for the people, anyway) from an upscale restaurant.

At first, I found that it was tricky to eat with one hand and keep the strong puppy from pulling towards the other dogs. I learned to wrap the leash around the arm of my chair, eat something manageable that didn't need to be cut (pizza), and keep her busy with small pieces of the dog treat doled out as I ate.

There are many restaurants, mostly cafes, that have patios where dogs may come and sit, but this was a special event just for dog people, at a restaurant I love to begin with.

But tonight was different. I thought something was odd when I saw crowds at the shopping center, even though the stores closed at 6.  And men were directing traffic. It was a fashion show for Fashion Week; I didn't know... I don't read the local paper, just The New York Times. I found a parking spot and Chou Chou and I pushed through the lights, runways, buffets, models, cameras, and large speakers blaring music. This chaos was wonderful socialization for a pup, and she took it all in stride. I was proud of her.

We wove through the crowds and reached the restaurant, and of course no other dogs were there, just crowds of beautiful young women in sparkly mini skirts and men talking loudly over the music.

I was not prepared for this -- dressed for a dog event and not a fashion show ("Oui, but I am always très chic!"). I turned to leave; but a server spotted me and gave me a table because, she told me, I (with Chou) am such a "faithful customer." They had the chef's dog treats at hand, and since Chou Chou was the only dog there, she got extras. Very nice of them!

The crowds of people who were drinking cocktails were not dog lovers (at least not interested on that night), never  glanced at my cute puppy. I ate and left, taking the extra bone cookies with us. Unfortunately, the season of doggie happy hours was over, until next summer.