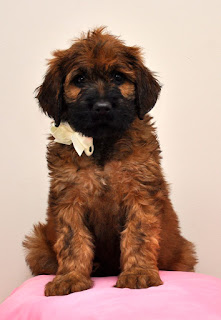 The breeder described Yellow Ribbon puppy as the alpha in her litter of seven. The pup likes to follow her around the yard, she says, nipping at her work boots.


The breeder thinks this is funny. I think it's bad training. I don't have boots ... will little Yellow Ribbon bite my ankles?

I am told that the puppy enjoys sitting on her littermates. They don't like that and turn to snap at her. So she started to sit on their heads so they couldn't turn around and nip. Clever.

Yellow will be a handful, outgoing and mischievous, I am warned. I've been trying to think of what to name her.

Based on the breeder's description, maybe Trickster, or Trixie, sounds like a good name for her.

She will arrive two evenings from now, at the San Francisco Airport in a crate with her sister (who was adopted by a family in San Francisco). A large crate big enough to hold 2 puppies will not fit into my Mini Cooper. I went back to the briard listserv, told them the problem, and briarders in the Bay Area offered to pick her up at the airport and bring her to Sacramento. What wonderful people!

The breeder sent me a photo of my puppy in the crate, on the way to the airport. If you look carefully, you will see her sister shoved into a corner while Yellow Ribbon spreads out across the crate pad. 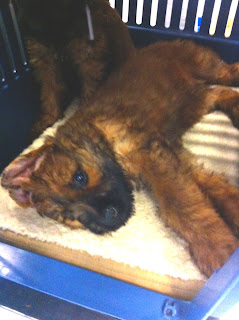